It’s a sad, but true, reality for those of us who want and need spankings in our relationships: most attempts at getting our partners to spank us fail. (Of course, given that most relationships in general fail, this is hardly a shocking piece of news.)

The internet is littered with spanking blogs that start full of promise and excitement (almost always written by women who want their partners to spank them), and are then abandoned weeks, months or in a few cases, years after they begin, when the spankings or the entire relationship have dwindled to nothing. Forums and online communities are full of posts from people (again, mostly women) who tried and failed to make spanking work with their partners. And I get emails regularly from men and women who started out great with their spanking partners—then things went horribly wrong.

When spanking in a relationship doesn’t work, both parties wind up discouraged and frustrated. She feels hurt, rejected and discouraged, and doesn’t understand why he let her down, and he feels like he did his best and doesn’t have a clue what he did wrong.

The common thread among most of these “un-success” stories seems to come down to one thing: that each partner comes to the experience with a radically different expectation of the place of spanking in the relationship.

More specifically, almost without exception, the spankee’s disappointment comes from her expectation that spanking will be as important to her partner as it is to her.

As her partner, you may be excited about the prospect of spanking her, or at the very least willing to explore it. And you may genuinely and with all your heart understand how important spanking is to her happiness and be willing to make it happen.

But the reality is that, unless you, as the spanker, were already interested in spanking before you came to the relationship, the odds are that spanking will probably not be anywhere near as important to you as it is to her (at least not at the beginning – as you begin to experience the benefits we talked about in the prior chapter, you may find spanking becomes very important to you).

That means that, for example, you can probably give her a spanking, then put the whole thing aside and go on with your life without thinking about it at all for awhile. Not so for her.

For her, particularly once you’ve actually started spanking together, no matter how enthusiastically you spank in the moment, she will probably take this ability of yours to spank and move on as a sign that you aren’t really interested, that you think it’s stupid or boring, that you don’t care about her or that you don’t realize how important it is (or all of the above).

Most people who want spankings have a very difficult time understanding and accepting this dramatic difference in interest levels. Time and time again, I hear from women who are frustrated that their partner isn’t giving their spanking life together the same time, attention and enthusiasm that she is.

To make matters worse, this problem seems on the surface to be irresolvable. How can you possibly make yourself be as interested in spanking as someone who has been fantasizing (obsessing?) about it since they were a kid?

Don’t worry. I’m not going to tell you that you have to spend the same amount of time, energy and enthusiasm on spanking as your partner does for all of this to work. It’s probably not realistic that you will. While you can certainly come to appreciate spanking, ultimately spanking is her “thing,” not yours, and probably to some extent may always be. And while it is important in a relationship to give time and attention to what your partner wants, the reality is that it’s not fair or reasonable to expect that you will give spanking the same time and attention that your partner does.

To understand and be able to manage the dramatically different expectations the two of you will probably have with regard to spanking, you need to understand why she expects you to prioritize spanking the way she does. The more you understand her way of thinking, the easier it will be to give her what she wants without having to pretend to be someone you’re not.

So let’s look more closely at why your partner may expect you to care as much about spanking as she does.

First, much of this expectation on her part that you will make spanking a priority is built into the idea of spanking itself.

For many of us, a large part of the appeal of spanking is that it takes us back to the safety of childhood, when (in reality or in fantasy) a loving parent made us the center of their universe and made our needs their first priority. This perfect, attentive parent (who in almost all cases is probably more of a fantasy than a reality) always paid attention to what we were doing, always cared enough to teach us right from wrong and always spanked us when we needed it, no matter what else they were doing at the time.

Rationally, we all know that even the best parents aren’t that consistent in their attention, and that most parents fall far short of this utopian ideal. But the need and desire for spankings isn’t rooted in rationality. It’s rooted in deep and unfulfilled primal needs for that kind of love, consistency and attention. (That’s one of the reasons why it goes so much deeper than a simple “fetish.”)

This connection of spanking to an unmet, primal need to be loved and protected by a parent is why it’s natural and understandable that your partner will expect—consciously or subconsciously—that same level of consistency, attention and devotion from you when it comes to spanking. Especially once she has part of the fantasy – the spankings themselves – it’s easy for her to get caught up in the experience and expect the other part of the fantasy – the consistent and single-minded attention.

Of course, your partner isn’t a child, and even if she were, most children don’t get anywhere near that level of consistent love and attention. Which means that her expectations, however understandable, are probably not going to be something that you – or anyone – can realistically fulfill.

This is, of course, a common source of tension in any relationship, spanking or not. She expects him to care as much about having kids as she does, and when he doesn’t, she feels betrayed. Or he doesn’t understand why she’s not thrilled that he’s presented her with two courtside seats to see his favorite basketball team on their anniversary. Maybe she wants him to spend a romantic weekend in Paris because it’s her favorite city, but he wants her to prefer to go camping with him because the outdoors is where he feels most at home. And so on and so on.

Spanking is no exception. Because she wants and needs it so much, it’s understandable that she would expect and want you to feel the same way.

The third major reason your partner may be expecting more from you when it comes to spanking than you are realistically willing or able to give is that women tend to expect men to care more about maintaining the relationship in general than men are willing or able to do.

The same part of her that expects you to: remember her birthday, Valentine’s Day, the anniversary of your first date, your engagement anniversary and your wedding anniversary, notice that she’s wearing new shoes, cut her hair, lost five pounds, is wearing a new shade of eyeliner, be happy about taking time off during an important project at work to go away for the weekend, spend the night at a romantic restaurant with her instead of at the hockey game, cuddle her after sex and help choose the flowers for the wedding… is the part of her that expects you to care as much about spanking as she does.

Most women in particular don’t want to hear this, but as a man, you will probably never give the same time and attention to your relationship that a woman does, and fighting that is likely to do nothing more than cause pain and frustration on both sides in an otherwise good and loving relationship.

Not surprisingly, the reason for this difference in priorities goes back to that “lizard brain” of ours. You remember that brain, right? The one that hasn’t changed as much as we’d like to think since caveman days, when men’s primary function was to go out and get meat for their families, and women’s primary function was to hang out at the cave with the other women, cook the meals, raise the kids and foster connections to family and community?

For the past several millennia, right up until now, then, the primary responsibility for maintaining the emotional and relationship ties to the family and community has fallen to the female. And again, remember, just a few decades of politically correct egalitarian philosophies are no match for millions of years of primal instinct. In short, men expect to bring home the bacon. They don’t expect to have to talk about feelings while it’s being prepared.

Okay, so it’s fairly easy to see why your partner may go into all this spanking stuff with unrealistic expectations. But short of rearranging your entire life to accommodate her spanking passions, what’s to be done about it?

The good news here is that once you understand what it is that she really wants from you with regard to spanking, there are some easy, specific ways of signaling to her that you haven’t abandoned her – ways that you can use without having to devote excessive time and energy to filling her spanking needs.

In this chapter, we’re going to step through the seven things that are most important to your partner when it comes to spanking. We’ll also talk about the most common ways that your partner is likely to feel disappointed by a spanking. And finally, we’ll talk about some easy, low-maintenance ways of fulfilling her expectations, avoiding disappointments and experiencing spanking as a way to enrich your relationship–all without forcing you to make spanking a major priority in your life.

So let’s look at her first spanking desire… 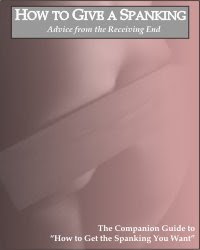 Absolutely spot on, I could not agree more. It is so difficult from my experience for an individual who has no interest in spanking to just switch on and assert themselves to their partner’s fantasies. I feel mostly for the people who like to deliver a spanking to a partner who refuses point blank, for those who wish to receive spankings there are easier ways around this.

I can assure you nothing is worse than needing the guidance of your partner by receiving a spanking from them and it never materialises. Likewise, if a spanker has the urge to deliver a spanking and the partner refuses this can be equally frustrating.

Practice makes perfect from both sides, I repeat from my experience the person who has no interest in spanking can come round to its splendour, provided they what is going to happen step by step. Obviously, this means discussions and negotiations from both parties maybe acting out a role play, or even a script which can be followed and practiced on.

This I find works because everything is linear, you know what to expect and when to expect it, and even the dialogue can be used and practiced until the whole set meets both parties wishes.